Curve it! – The Magnus Effect

While a straight, no-nonsense fastball seems to be the default throw, I’m sure that as athletes we’ve definitely been on the receiving end of all sorts of different balls which baffle us. Velocity is prized above all, but yet it’s these balls which swerve and curve and are nearly impossible to read, which achieve what the former cannot. The sudden change in mid-air throws off even the best player’s perception of the ball, forcing instant reflex, and quickly eliminating many.

No matter the motion of the ball mid-flight, there will always be three different forces acting upon it, namely,

In this post, we’ll be looking at how the Magnus Force affects the travel path of the ball.

To first understand how the Magnus Effect takes place, we have to understand Bernoulli’s Principle, which simply states that:

In this case, the fluid we are referring to would be the air surrounding the ball in motion.

To put it down simply, pressure is exerted by the random motion of air molecules pressing outwards (yes, we’re down to the molecular level now!). Since the volume of air which flows is the same – but there is an increase in speed, this means the amount of time these air molecules can press outwards at any given moment is LESS – thus it exerts less pressure! 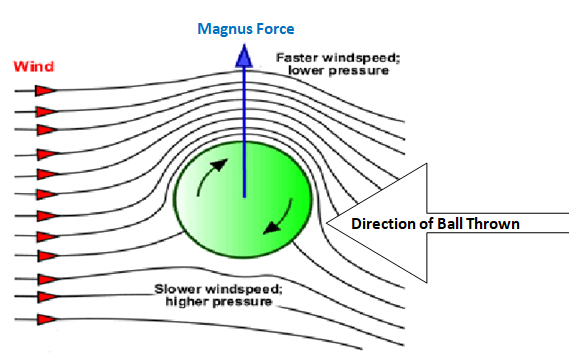 Based on Bernoulli’s principle, this simultaneously creates a region of low pressure above the ball as well as a region of high pressure below the ball. All other factors aside, objects will naturally move from regions of higher pressures to lower pressures – and thus this creates an airlift for the ball – giving it more force to oppose gravity, allowing it to travel further, faster as well as a slight upward curve.

This collective application of forces is thus known as the Magnus Force.

Here, we can clearly observe Piong’s (8) from Team Malaysia throwing a ball with topspin, with it’s trajectory clearly obeying the upward curve of the Magnus Force.

Velocity is King, but being able to put curves and swerves in your throws will bring you a long way. As the game progresses, and people’s focus start to waver, you’ll find that, straight, hard balls have trajectories which are much easier to predict, and to dodge or block. Sacrificing a little speed for the unpredictable nature of your ball may very well pay dividends, especially at the highest level, where everyone is able to throw at higher speeds already anyway!